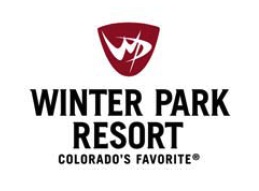 Winter Park has been running ads on the radio all day today.  They have fresh snow.

Passes can be purchased online for a limited time at http://www.winterparkresort.com/springbreak

There appear to be no restrictions on the number of passes one can buy.  Pass insurance is available.

It's not mentioned but I suspect this is a picture pass.  No advance purchase policy listed either.

Copper Mountain is selling lift tickets at a discount for the next 72 hours.  No, it's not a scam.  Just travel to the Copper Mountain website and you'll get all the details.

Ticket prices start at $64.  They must be purchased at least one day in advance.  The current window rate is $109.

As usual, quantities are limited.  I just checked - they are going fast.

Can't make March 14th?  Keep the printout.  It's good for a 2 for 1 adult lift ticket deal for the following  two weeks.  Don't wait to print it out either - it's only on the website on the 14th.

Loveland is a great alternative to the large commercial joints of Summit County.  Brown bag your lunch or buy the reasonably priced food on-site.   Take three lessons and get a free season pass.

It's right at Exit 216 at the Eisenhower-Johnson Tunnels.

Run, don't walk to this incredible deal for Telluride lift tickets.  It's a fundraiser for a Colorado Mesa University nursing trip to Nicaragua too.

Get a three day pass to Telluride Ski Resort for only $125.  Yes, an unheard of unbelievable price!

There are no restrictions on this pass either.  Additional days can be purchased for 20% off.  Tickets are normally $106/day there.


There are two ways to buy the pass - in person or online.
That's it.   A portion of the proceeds support the trip.

Then go skiing, snowboarding, or skibiking to your heart's desire.  It doesn't get any cheaper than this at Telluride.

I have no idea how long this deal will last.  It could be gone tomorrow.

Discounted lift tickets are on sale for a limited time for Winter Park Resort.  No need to wait in line or leave the house, you can purchase them online now.

The current window rates are

King Soopers doesn't sell lift tickets to Steamboat Ski Resort.  Neither does Safeway or any other Colorado grocery store.  It's a destination ski area in the state and is far away from the competitive Front Range Market.

So where can you get a deal on their tickets?  Very few places.

Your best bet is to package your lift pass with your lodging.   Give at least 7 days advance notice so they can buy them for you from the resort.

Anyone can buy these passes online from about mid-March through November.

These can be purchased online from about March through December.

It can be purchased online from the Steamboat website.  It's valid the first two weeks in April.

There really are very few discounts available for Steamboat.  If you want one, you'll need to plan your vacation there in the off-season.

More ideas can be found at http://skiing.helium.com/how-to/11967-how-to-get-discount-ski-lift-tickets-to-steamboat-ski-resort

If you want to purchase discount lift tickets to Steamboat in King Soopers, you'll have to use your hot tub time machine. They haven't done that since the mid-1990's.

I spotted 3 packs of discount lift tickets to Eldora in the Superior, Colorado Costco location on Sunday February 17, 2013.

The display is up near the front registers.  It is currently on a corner of the main isle leading up to the cashiers.

The display was rather large.  I don't think they'll be running out of them anytime soon.

Remember: You can always buy lift tickets at their retail store in Boulder, CO. It is located at 2775 Canyon Blvd (28th & Canyon). It's open seven days a week and holidays.  Hours vary. 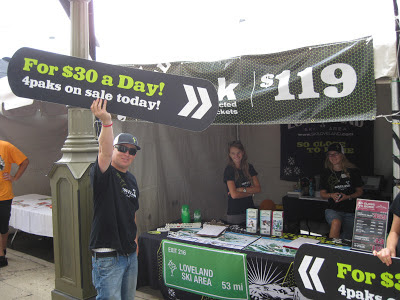 Registered VIP members of 95.7 The Party get that coveted discount coupon for an all-day adult lift pass.  Sign up and then print it out on Hooky Day.

Take the printout to the ticket window to purchase.  It's that simple.

Can't make it?  Print it out anyway.  It's good for a 2 for 1 adult ticket for the following two weeks.

Playing hooky has never been so fun.

Blackout days for the Epic Pass?

There are none for the Epic Pass.   That includes the Epic 7-Day too.

Ski any day you want at Breckenridge, Vail, Beaver Creek, and Keystone in Colorado.  In California, it includes Heavenly, Northstar, and Kirkwood.

Passes with restricted days include the Epic Local Pass, and the Summit Value Pass.  Major holidays such as Thanksgiving, Christmas, New Year's, MLK weekend, and President's weekend are out for these passes. One can use the pass to buy discounted lift tickets during those periods.

The passes are sold from around late March to mid-November.   If you are reading this post during ski season, they are no longer for sale.  You'll need to plan ahead for next season.

If you a member of the ski industry (SIA member, NSAA, PSIA, Ski Patrol, Media)  you may be eligible to attend the SIA trade show in Denver, Colorado and pick up an Epic Pass mid-season.  You'll need to be an official badge holding SIA attendee to purchase one.  The trade show is not open to the general public. 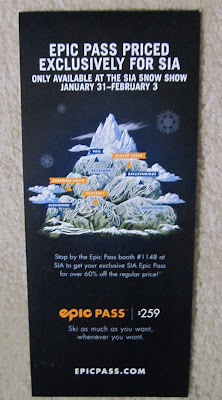 I bought the special SIA Snow Show Epic Pass for $259 on Thursday.  It's valid starting February 4, 2013 to the end of the ski season.  It doesn't come with friends and family discounts.  It's still a great deal though. 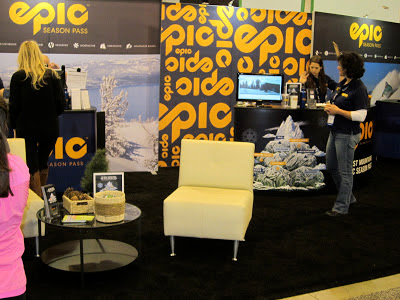 It's snowed quite a bit the past week here in Colorado.  Time to hit Vail. 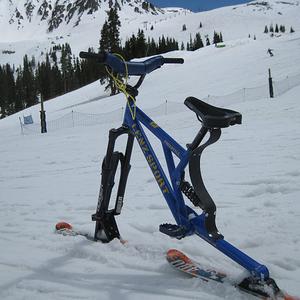 Your source for skibike accessories and parts 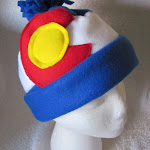 My Colorado Collectables Store on Ebid.net

Tip Your Ski or Snowboard Instructor

The instructor only receives about $5.00 in wages of the money you pay at the lesson desk. They do not get a percentage of the lesson cost.

If you or your child has a fun lesson, learn something, and get individual attention - the proper etiquette is to tip your instructor. $5-10 is typical for a group lesson while a private lesson is $50+.

You wouldn't stiff your breakfast waitress, so why would you stiff your instructor?

Other Blogs of Note